Development cooperation between the United Kingdom(UK) and Vietnam dates back to the early 1960s. It entered a new phase in 1998 when UK-DFID opened an office in Hanoi, appointing a Head of Office in 1999. Soon after, DFID scaled up the level of development assistance to Vietnam substantially. The UK has been one of Vietnam’s principal bilateral official development assistance (ODA) donors over the last 15 years. Almost all DFID ODA to Vietnam has been allocated under three so-called pillars: (a) the Millennium Development Goals (MDGs); (b) Governance; and (c) Wealth Creation. The MDG pillar is by far the largest in terms of expenditure; up to 2012, just under 60% of total DFID bilateral support for Vietnam was allocated under it. Bilateral development cooperation between the UK and Vietnam will end in 2016 with the closure of the DFID office in Hanoi. DFID has engaged Landell Mills to undertake an evaluation of UK development cooperation with Vietnam since 1999. This document summarises and highlights key findings, distilling some emerging key lessons for development cooperation. 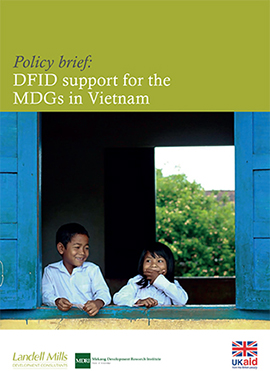 Citizens’ Opinions of and Experiences with Government Responses to COVID-19 Pandemic in Vietnam: Findings from a phone-based survey

INTRODUCTION Viet Nam has been praised by citizens and the international community for its effectiveness in curbing the outbreak of the SARS-CoV2 pandemic (better known as the COVID-19 pandemic, or COVID-19). Since January 2020, the Government of Viet Nam (GoV) has been implementing important measures to contain COVID-19, with the most aggressive one being the […]

Female leadership and borrowing constraints: Evidence from an emerging economy

This study investigates the differences in credit access between male-managed and female-managed firms using two Enterprise Censuses in Vietnam. Our findings reveal that women-managed firms are less likely to borrow from commercial banks than their male counterparts, even when controlling for other determinants such as CEO education and experience, firm size, and ownership. No difference […]

OVERVIEW Mekong Development Research Institute (MDRI) would like to present to you the second edition of the book  54 Ethnic Groups: Why the Difference? The book is the updated version of the previous book published in 2014 based on our knowledge and experience while working with donors, NGOs, and multiple ethnic groups in an effort to provide […]

This research study entitled “Exploring barriers to accessing maternal health and family planning services in ethnic minority communities in Viet Nam” was supported, and the scope of the study developed, by the Ministry of Health and the United Nations Population Fund (UNFPA) in Viet Nam. The study was implemented and managed by the University of […]

An analysis report on the household registration system in Vietnam

INTRODUCTION Research objective Upon collecting data from over 5000 households in Vietnam, the research team has compiled an analysis report on the Household Registration System (“Hộ khẩu”) in Vietnam. The report provides a detailed profile of migrants without permanent residence permits, comparing people with and those without a permanent residence permit in different areas from demography and […]

INTRODUCTION Research objective This is the synthesis report of the VTE financing programs/cost norm studies. The four particular objectives are: Evaluate the effectiveness of input-based and output-based budget fundingmodel, based on the development of vocational education and training schools oriented by demand. Allocate reasonably input resources to fund for VTE institutions Determine vocational education and […]

This study examines multidimensional poverty in Vietnam using the method of Alkire and Foster (2007, 2011) and household data from Vietnam Household Living Standard Surveys 2010 and 2012. The poverty is analyzed in five dimensions including health, education, insurance and social support, living condition, and social participation. The result shows that multidimensional poverty has decreased […]

INTRODUCTION Implemented in 1957, the residential registration system called ho khau in Vietnam was intended as a means to put a check on population growth in major cities. To this day, the system remains an important tool of the State to monitor demographics, maintain social security and curb immigration into big cities. On the downside, […]

INTRODUCTION Myanmar has the lowest rate of electrification in South­east Asia. Increasing electricity supply for power generation to buttress development and lift its large rural population out of poverty is one of Myanmar’s defining challenges. Possessing large rivers including the Irrawaddy and Salween, the country’s development of hydropower plants (HPPs) is anticipated to provide the […]

The Urban-Rural Gap in Governance and Public Administration: Evidence from Vietnam

Abstract The relationship between development and governance is a central question in the public administration literature on developing countries. Yet, we still understand little about the gap between urban and rural governance in these nations. Our paper tackles this issue using the novel Vietnam Provincial Governance and Public Administration Performance Index (PAPI). PAPI is Vietnam’s […]

Do the poorest ethnic minorities benefit from a large-scale poverty reduction program? Evidence from Vietnam

To increase the opportunities for poor ethnic minorities to benefit from economic growth the government of Vietnam implemented a program entitled ‘Socio-economic Development for the Communes Facing Greatest Hardships in the Ethnic Minority and Mountainous Areas’ during 2006–2010. This paper provides empirical evidence of this program’s impacts on households in the project areas. We find […]

The study uses commune fixed-effects regressions to estimate the effect of natural disasters on welfare and poverty of rural households in Vietnam, and subsequently examines household and community characteristics that can strengthen resilience of households to natural disasters. We find that all the three disaster types considered in this study including storms, floods, and droughts […]

Does firm privatisation benefit local households? The case of Vietnam

Although most countries follow a market economy, they still maintain a number of state-owned firms. In Vietnam the process of firm privatisation has been going on since the early 1990s. However, state-owned firms and joint-venture firms with public capital still account for nearly 40% of total firm output. In this article we find that the […]

Should Parents Work Away from or Close to Home? The Effect of Parental Absence on Children’s Time Use in Vietnam

INTRODUCTION This report documents the progress/ results of Viet Nam in implementing MDGs throughout the period from 2001 to 2015. Along this 15-year journey of moving towards MDG achievement, after the first report compiled by UNDP in 2002, the country has developed annual Country Reports in 2005, 2008, 2010 and 2013 that described the progress […]

Non-Sampling Error and Data Quality: What Can We Learn from Surveys to Collect Data for Vulnerability Measurements?

This paper investigates the causes for non-response and measurement errors in household panel surveys designed for assessing vulnerability to poverty in Thailand and Vietnam. Using data from surveys conducted in 2007 and 2008 we show that interview environment, timing, interviewer, and some respondent characteristics significantly affect non-sampling errors. Investigating interviewer bias for household consumption we […]

Report: Assessment on the Socio-Economic Impacts of Hydro-Power Resettlement Projects on Ethnic Minorities

INTRODUCTION Along with increasing number of hydropower projects and the Government guidelines about the crucial role of hydropower in economic development in the coming years, it is essential to conduct research on socio-economic impact of hydropower projects on affected households, especially those of ethnic minority groups. In-depth studies on these issues can bring about meaningful […]

The Poverty and Welfare Effects of the 2008 Food Price Crisis in Vietnam: A Decomposition Analysis

Using panel data from the Vietnam Household Living Standard Survey (VHLSS), this paper examines the impacts of food price increases on welfare and poverty in Vietnam. It is found that on average the rise in food prices increased household welfare by 7.5 percentage points. However, the percentage of households who gained from the increase in […]

The impact of trade facilitation on poverty and inequality: Evidence from low- and middle-income countries

INTRODUCTION Scope of study Subcomponent 3.5 of NMPRP-II– Safeguarding assets of communities and households aims to build the communities’ knowledge of and capacity to understand and mitigate disaster risks and to improve efforts to address risks in investment and subproject design and implementation. Through this subcomponent the project seeks to develop natural disaster mitigation plans and […]

INTRODUCTION This report measures the progress of Vietnam moving towards achieving the MDGs. As the consequence of the Vietnam Full Country Report 2010, the report describes the achievements as well as identifies challenges faced by the country in the coming years. National development priorities upon completion of MDGs 2015 are discussed in this report. This […]

INTRODUCTION Scope of research In preparation for Poverty Reduction and Increase Better-off Household Program Phase 4, Ho Chi Minh City is reviewing its achievements and limitations in Phase 3 period to better improve its implementation plan and policy support mechanism for the coming period. The main purpose of this report is to assess the impact […]

INTRODUCTION Vietnam has achieved remarkable results in poverty reduction during the past 20 years. However, the progress of poverty reduction varies greatly among different ethnic groups. There are 54 ethnic groups in Vietnam; and the Kinh, the ethnic majority, accounts for around 86 percent of the national population. Compared with other ethnic minorities, Kinh people […]

Impact of Minimum Wage Increase on Employment, Wages and Expenditures in Vietnam

This study provides empirical evidence on the impact of a minimum wage increase on employment, wages, and expenditures of workers in the formal sector who have wages below the minimum level in Vietnam. Using the difference-in-differences with propensity score matching and Vietnam Household Living Standard Surveys 2004 and 2006, the paper finds that the minimum […]

The impact of minimum wages on employment of low-wage workers: Evidence from Vietnam

This study provides empirical evidence on the impact of a minimum wage increase on employment of workers in the formal sector who have wages below the minimum level in Vietnam. Using the difference-in-differences with propensity score matching and the Vietnam Household Living Standard Surveys of 2004 and 2006, the article finds that the minimum wage […]

Do Minimum Wage Increases Matter to Profitability of Private Firm? The Case of Vietnam.